Bring Life to Each Child 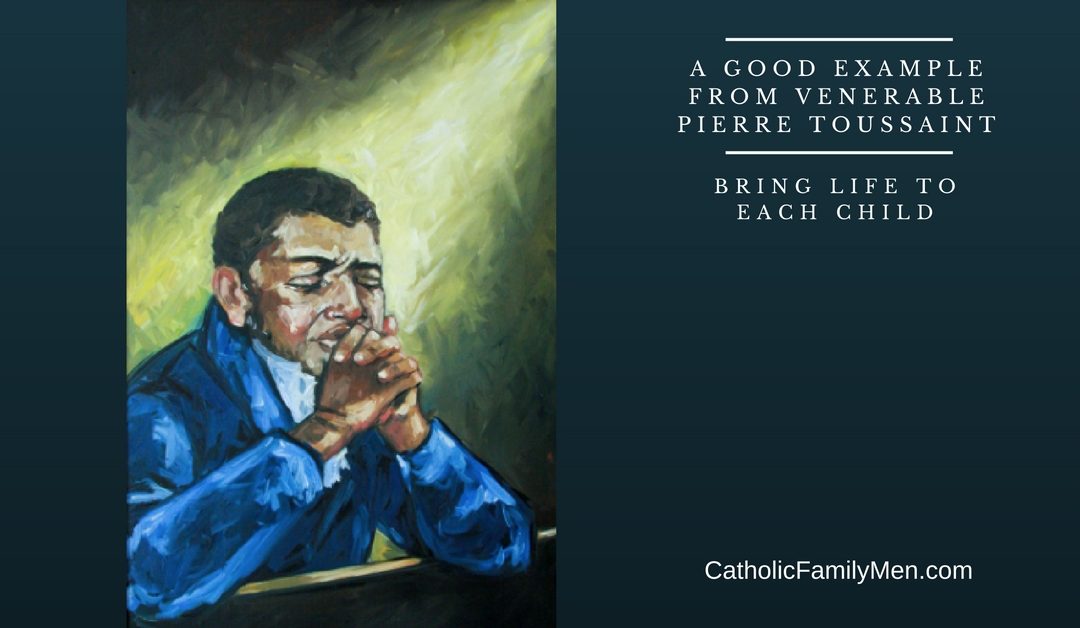 Venerable Pierre Toussaint was born into a life of slavery on a wealthy Haitian plantation in 1766. Political unrest and economic turmoil in Haiti led Berard, the plantation owner, to take refuge in New York. Five servants were taken along, including Pierre and his sister Rosalie.

After a year, the situation grew worse in Haiti and Berard took leave of his wife in New York to check on his property and affairs in Haiti. Before leaving, Berard instructed Pierre to learn the hairdressing business. Pierre did so and began serving upper class women with great success. One such woman of high society commented: “Some of the pleasantest hours I pass are in conversing with Toussaint while he is dressing my hair. I anticipate it as a daily recreation.”

Berard’s trip to Haiti was an unfortunate one. A first letter to his wife explained that all his property in Haiti was lost and that he must make the most of what he had placed in New York. A second letter followed – Berard had fallen ill and died suddenly. Madame Berard was left a widow in New York, and while the shock of her husband’s death was still fresh, the firm in New York that had held her property failed. Madame Berard was left destitute. Debts came due and all Madame Berard could do is to beg her creditors to be patient with her.

Pierre Toussaint had compassion on Madame Berard and used his own savings to help pay off her debts. In fact, Pierre dramatically increased his workload as a hairdresser and used nearly all of his earnings to help her. Toussaint considered Madame Berard to be his responsibility by God’s providence. Even after Madame Berard remarried, then became disabled by illness, Toussaint remained faithful to freely serving her. He often read to her and sought to console her in little ways. One friend remarked: “He is a Catholic, full in the faith of his Church…always acting from the principle that God is our common Father, and mankind our brethren.”

As Madame Berard, now Madame Nicholas due to remarriage, lay dying, she executed a deed to secure Pierre’s freedom by law. She then confessed her sins to a priest, received her last Communion, and expired from this earthly life. Toussaint continued to live with Monsieur Nicholas for the next four years, during which time Toussaint purchased his sister Rosalie’s freedom, allowing her to marry.

Euphemia herself was sickly and weak. Her doctor did not give much hope that she would live, yet Pierre believed otherwise.

“Every day Toussaint took the feeble little creature in his arms, and carried her to the Park, to the Battery, to every airy and pleasant spot where the fresh breezes sent invigorating influence, hoping to strengthen her frame and enable her lungs to gain a freer respiration. The first year of her life was one of constant struggle for existence, but God blessed their (Pierre and Juliette’s) untiring efforts, and the rail plant took root and flourished.”

We will pause at this good example for now, and continue with the life of Venerable Pierre Toussaint in the next post.

How Will I Apply This? (The Challenge):

Step 1: I will answer the following – “How can I spend time with each of my children today that will bring each child life (help each child to become more alive)?” Notice: For Pierre, it involved his physical presence and time spent together in nature.

Step 2: I will increase the priority of spending time with each child by acknowledging the fragileness of this earthly life and the unique opportunity I have to bless my children with my fatherly love this very day.

Step 3: I will freely give myself to the action(s) I identified in step one.