Develop a Small Habit of Penance for Generational Sins 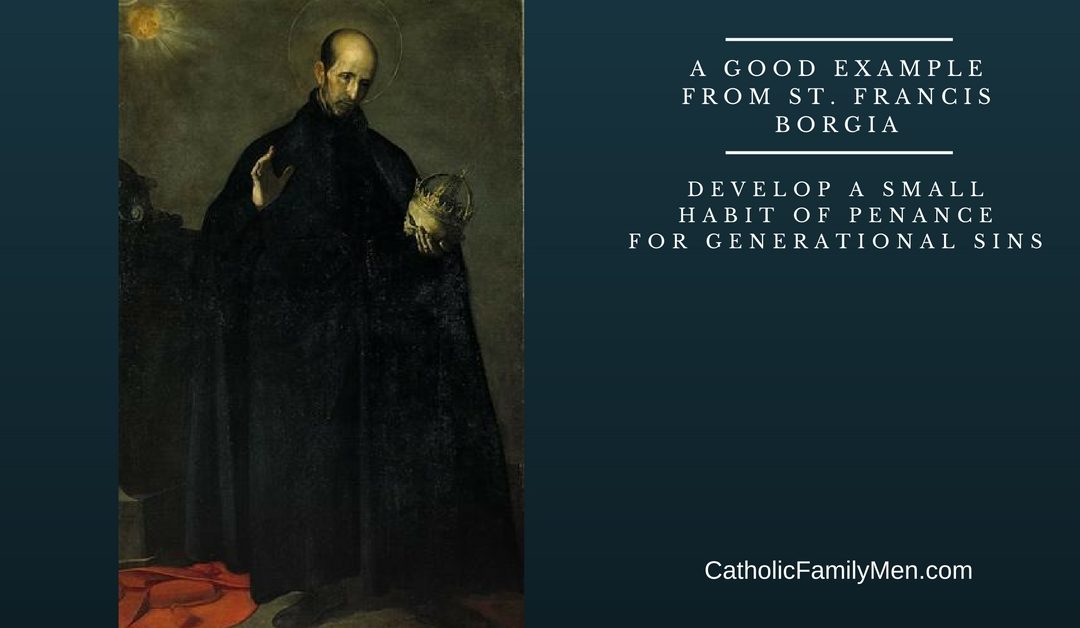 Saint Francis Borgia was born into an aristocratic Catholic family and grew up in a world of high nobility and luxury. He married at 18 and became the father of eight children. Francis exhibited many strong virtues, but his concerns were of a more superficial nature, until the sudden death of a close friend sparked a path of conversion for Francis.

While leading the funeral procession of his close personal friend Empress Isabella, he caught sight of her completely disfigured dead face. He was deeply shaken by the event and convicted by the transience of human life. Francis resolved to live the rest of his life focused on deeper concerns in light of eternity. Francis’ Catholic Faith came alive and so did he.

After 17 years of marriage, Francis’ wife Eleonor died after battling a few years of serious illness. His sorrow was bitter, but he persevered firmly in faith and found his consolation and strength in the Sacraments.

Francis went on to make the Spiritual Exercises with the founder of the Jesuits, St. Ignatius of Loyola. Francis renounced his high worldly status and was admitted into the Society of Jesus. He was eventually ordained a priest and later was elected father general of the Society of Jesus. Francis died in Rome in the odor of sanctity.

Here is one small, interesting habit from the life of St. Francis Borga:

“He used to sign his name ‘Francis, the sinner’, not so much on account of his own sins – throughout his whole life these were hardly serious or numerous – but rather humbly acknowledging that he was a descendant of the infamous Borgia family. He was atoning for them, seeking to make reparation for the crimes of that branch of the Spanish nobility, including those personally committed by Pope Alexander VI, who was his great-grandfather.”

Step 1: I will schedule at least 20 minutes to prayerfully reflect upon my family tree, most specifically my parents and grandparents.

Step 4: In noticing the greatest error handed on through the generations, I will pray for its destruction. May I grow in the opposite virtue and hand on freedom and strength to my children in this area.

Step 5: What is some small act of penance I can do regularly as an action to intentionally counteract the error handed on and as a prayer for God’s mercy, healing, and strengthening upon my lineage past, present, and future (Notice: Saint Francis Borgia was making an act of humility in signing his name “the sinner” as a direct opposition to his family’s root sin of pride).

Saint Francis Borgia, pray for us!