Engage the Culture with Christ 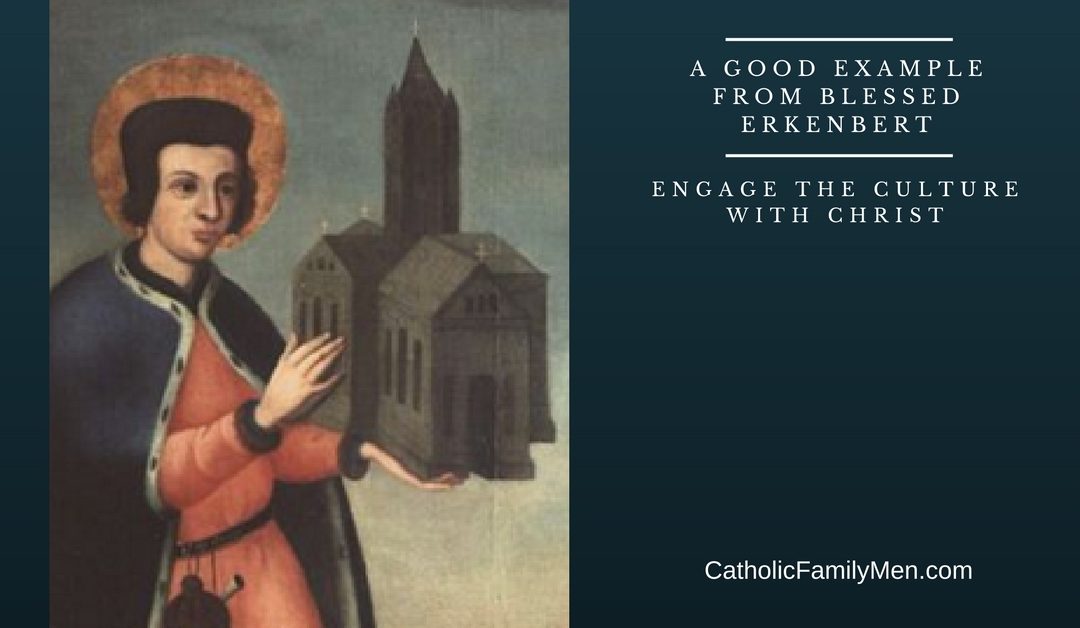 A good example from Blessed Erkenbert of Frankenthal:

In the lives of husbands and fathers who have officially been named Saints and Blesseds by the Catholic Church, we sometimes see the example of a sort of “second calling” later in life to enter into religious life. For some, their wives die and they experience a new vocation from God, oftentimes to enter the priesthood. For others, they discern, in union with their wives and with competent spiritual guides, a call to separate from their wives (not divorce) in order to enter into the life of a religious community.

[The rather high density of such cases within the overall mosaic of saintly husbands and fathers who have been officially recognized by the Church does not necessarily mean that such a path is a greater source of holiness, although it may possibly be or have been. It is worth noting that over past centuries it would be far easier and far more likely for a deceased person to enter into the long process whereby the Church considers their cause for canonization if that person was part of a religious community that was committed to investing the time and work necessary to advance their cause. It is also true that in past centuries the universal call to holiness was not widely understood and thus many falsely perceived that to live a holy life was something that was exclusively reserved to a religious vocation.]Blessed Erkenbert was known as living a virtuous Catholic life from an early age. Erkenbert entered into the Sacrament of Marriage, near the turn of the 12th Century, with the equally virtuous Richlinde (who has also been named “Blessed” by the Church). Together they had two sons: Wolfram and Kuno.

After a miraculous recovery from a serious illness, Erkenbert’s faith grew stronger and his zeal for living it out intensified. He devoted himself to works of mercy and in 1119 he founded a chapter of Augustinian canons on his own property in Frankenthal. Erkenbert eventually entered the Order himself.

In 1225, Richlinde also founded a nearby convent of Augustinian canonesses. The canons of Erkenbert and Richlinde developed very quickly into economic and cultural centers that were centered and soaked in prayer. These new canons served the local pastoral needs and led to a fundamental change in village life.

On Christmas Eve, December 24, 1132, Blessed Erkenbert died in the presence of his community and in the odor of sanctity.

Step 1: I will notice how Blessed Erkenbert was both faithful to the demands of his vocation as a virtuous husband and father and also intensely focused on engaging the wider culture with Christ.

Step 2: I will prayerfully reflect on how God may be calling me to give more of myself to help provide a Christian leaven within the wider culture, especially by considering the already existing efforts of my parish family and Diocese, and the opportunities to bring Christ more fully to others within the circles I already find myself.

Step 3: I will commit to continue this prayerful pondering at a specific and most personally advantageous time of day for a certain period of time (ex. every morning at 6AM for the next seven days).

Step 4: I will record  and commit to at least one specific resolution, whether it is a renewal and possible intensification of some area I am already engaged in, or a new area of engagement altogether.

Blessed Erkenbert, pray for us!