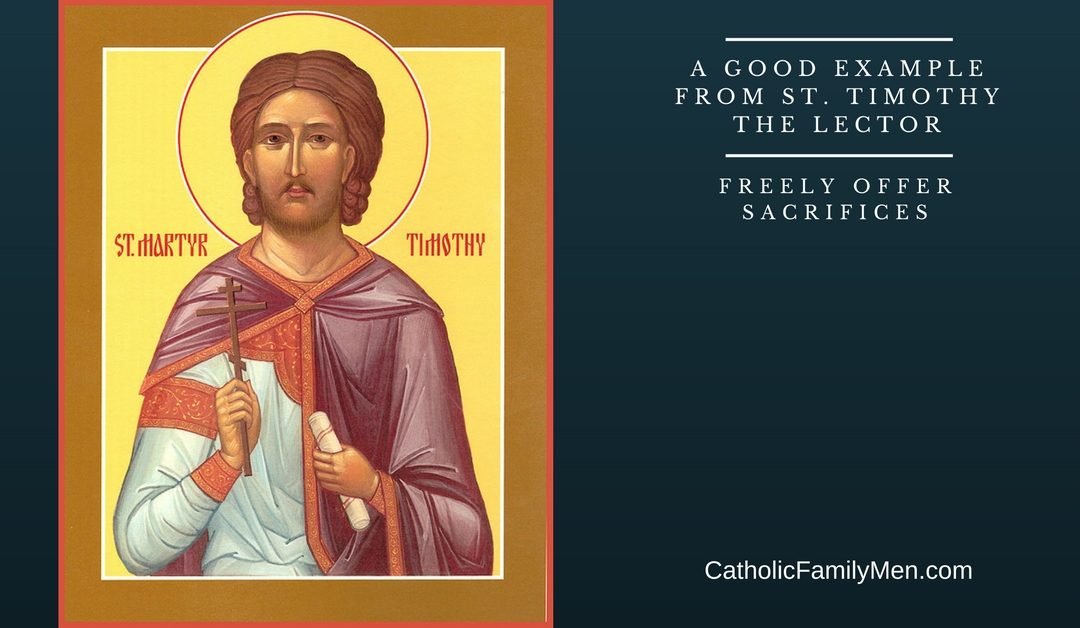 A Good Example from Saint Timothy the Lector:

Diving deep into Church history, we find Saint Timothy the Lector, a disciple of Christ who lived out his earthly life in the late third century under Roman persecution. Timothy was known for being an authentic disciple of Christ, one mark of which was his strong knowledge of the Sacred Scriptures. He would often share the Scriptures with villagers after the day’s work. Timothy was ordained in the minor order of lector by his bishop, according to the custom of that time.

Timothy married Maura, a seventeen-year-old woman of great faith, yet after only three weeks of matrimony, the local governor Arianus pronounced Timothy “one of the greatest enemies of the gods.” Timothy was arrested and questioned by Arianus, “Are you not aware of the edicts of the emperors against those who refuse to sacrifice to idols?”

Timothy answered plainly, “I am aware of them, but will rather lay down my life than commit such an act of impiety.”

Arianus ordered Timothy to be tortured. Burning irons were put into Timothy’s ears, causing his eyes to bulge from their sockets. Timothy responded by giving thanks to God and by freely entering into the pain as a sacrificial offering in union with Christ to the Father. This enraged Arianus all the more. Timothy was then suspended by his feet with a large stone tied to his neck. Wood was stuffed into his mouth to prevent him from speaking.  Even with this, Arianus was unable to break Timothy’s spirit, and so Arianus sent for Maura.

Maura was instructed that she alone could save her husband from death – it was up to her to convince Timothy to sacrifice to the Roman gods. Maura, seeing Timothy in such an awful condition, did her best to persuade her husband to abandon the faith and thereby save his earthly life. Timothy’s mouth was cleared so that he might answer, “How is it possible, O Maura, that, being thyself a Christian, instead of animating me to die for the faith, thou dost tempt me to abandon it; and thus, to obtain a short and miserable existence here, expose myself to the never-ending pains of hell? Is this, then, thy love?”

Maura was instantly converted by her husband’s words. She fell to her knees with tears of repentance and sought God’s forgiveness. Maura then turned to Timothy, asked for his forgiveness, encouraged him to remain firm in his faith, and expressed her desire to share his martyrdom.

At Timothy’s prompting, Maura retracted her first step by returning to Arianus where she publicly expressed her desire to live her faith and to die for Jesus. Following Timothy’s example, Maura freely and lovingly offered herself as a living sacrifice in union with Jesus as a gift to the Father.

It deserves to be noted that “Maura at first was afraid to trust her own weakness; but Timothy prayed for her so effectually, that the Lord granted her grace and strength to execute the orders of her pious husband.” [1]

Arianus was shocked by Maura’s sudden change. He tried to tempt her back to his perspective by promising her a new and better husband to replace Timothy. Maura’s faith was unwavering. She explained that after Timothy’s death, she would have no other spouse than Jesus Christ.

Maura was tortured for her faith. Her hair was violently pulled out and her fingers were cut off. She was then immersed in boiling water, yet Maura emerged from the caldron uninjured. This had a major impact on Arianus and it would contribute to his own conversion just days after these events, but for the moment, Arianus did not quit. Maura was tortured with burning sulphur, tar, and was sentenced to death.

On the way to her execution, Maura’s mother embraced her and with many tears sought to save her. Maura freed herself from the earthly embrace and hastened to the cross. Finally, Maura and Timothy were crucified – together on one cross, opposite one another. They were fastened in such a way as to prolong their pain, and so Saint Timothy the Lector and Saint Maura spent their final earthly days praising God in their suffering and encouraging one another with the hope of being fully united to Jesus Christ in Heaven.

Step 1: Before the end of this day, I will spend at least 20 minutes in prayerful reflection on the following question – “Holy Spirit show me…where are the crosses in my life that I am called to freely embrace as a means of offering myself in union with Jesus as a gift to the Father?”

Step 2: As I identify these crosses, I will write them down.

Step 3: When I encounter these crosses throughout the day, I will choose to freely offer myself in love by engaging in the action I am called to, rather than fleeing from it or complaining about it. When it is especially difficult to make this sincere gift of self, I will pray: “Jesus, help me to love like You.”

Step 4: I will invite my wife to consider steps 1-3 for her own growth.

Step 5: At the end of each day, I will spend at least one minute seeking to praise and thank God with my whole heart, regardless of how I feel in the moment. And I will invite my wife to join me.

Saint Timothy the Lector and Saint Maura, pray for us!