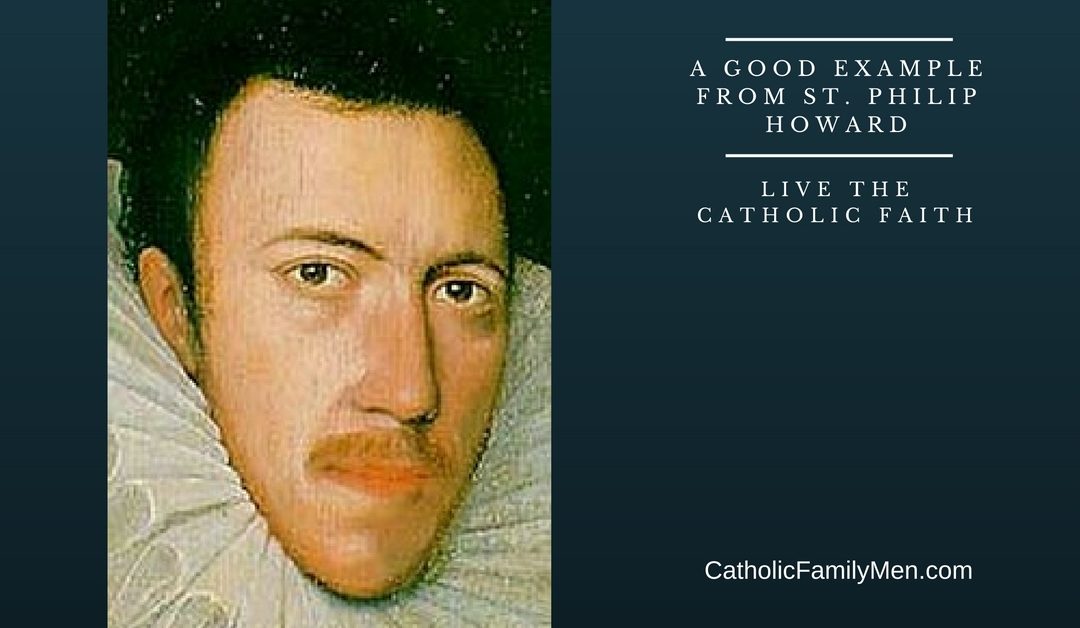 Early on in his marriage, Philip neglected God and his wife because he valued his career and worldly advancement above all else. For Philip’s efforts he received the title of Earl, became a favorite of Queen Elizabeth I, and was a frequent guest in England’s royal court. Philip was “successful” by worldly standards.

In 1581, while enjoying a seat at the queen’s court, Phillip witnessed a theological dispute between Anglican theologians and a Jesuit priest named Edmund Campion (the future Saint Edmund Campion). The dispute resulted in Campion’s martyrdom and the episode had a massive impact on Philip.

The grace flowing from Campion’s witness eventually led Philip to receive and profess the Catholic Faith. Subsequently, Philip’s values found right order – rising to the top of his list of priorities: Jesus, the Catholic Church instituted by Jesus, and Philip’s vocation as husband to his wife Anne.

Caught in the context of a culture hostile to Catholicism, the consequences of Philip’s ongoing conversion were grave. Philip lost the worldly status of “success” that he once treasured. He was imprisoned in the Tower of London for more than 10 years and was refused request to see Anne who was pregnant at the time of his arrest. Philip’s earthly life ended in the Tower of London on October 19, 1595. He never set eyes upon his only child, a son, in this life.

St. Philip Howard could have been released from imprisonment at any time, if only he would renounce Catholicism and convert back to Protestantism; however, Philip freely chose to live the Catholic Faith regardless of the personal cost. He realized that, above all else, fidelity to Jesus and His Catholic Church was the greatest gift that he could give to his wife and child. Philip found true success: faithfulness.

St. Philip scratched the following words in the Tower of London and they can still be seen by visitors today: “(in Latin) The more afflictions we bear for Christ in this world, the more glory we attain with Christ in the world to come.”

Step 1: I will prayerfully answer the question – “In truly living the Catholic Faith, where am I most in need of conversion?” (If I need help finding the answer, I will scan the index of the Catechism of the Catholic Church and notice when something firmly strikes my conscience.)

Step 2: I will find the topic in the index of the Catechism and humbly read the paragraph(s) referenced – placing the truth of the Magisterial teaching above my own pride.

Step 3: From the passages read, I will identify one quote that best embodies the truth I need to more greatly receive and profess with my life. I will write it down on an index card, along with St. Philip’s words: “The more afflictions we bear for Christ in this world, the more glory we attain with Christ in the world to come.”

Step 4: I will carry the card in my pocket at all times for the next two weeks with the commitment to read the words and think deeply about them at least twice per day (Bonus Tip: Use a concrete trigger to remind you, such as brushing your teeth).

Saint Philip Howard, pray for us!