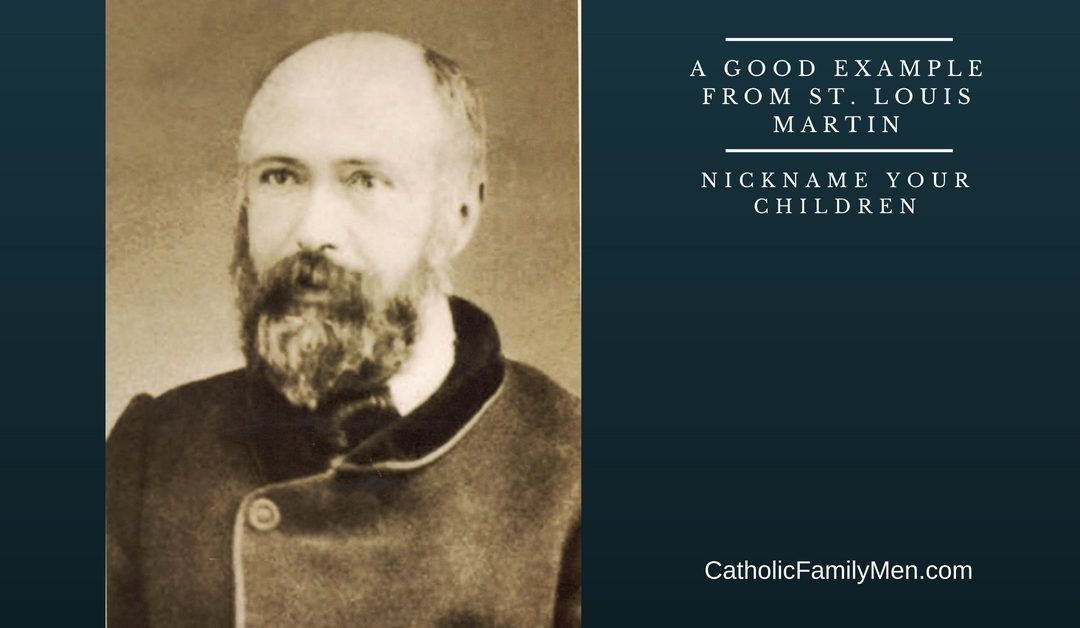 Louis and Maria Azelia (“Zelie”) Martin were canonized on October 18, 2015 – the first joint canonization of a married couple.

St. Louis Martin is best known as the father of St. Therese of the Child Jesus, a.k.a. the Little Flower. Therese was the last of nine children; four died in infancy, while the other five, all daughters, each answered a call to religious life.

After the earthly death of Zelie due to breast cancer, Louis was left with his five daughters ranging in age from 4 to 17. Many of his friends, including his spiritual director, advised Louis to send the girls to boarding school. They argued that Louis was too old to change all his ways and begin an entirely new life.

Seeking the best interest of his children, Louis consulted his oldest girls and subsequently decided to move the family from Alencon to Lisieux in order for his daughters to be nearer to the good influence of a beloved Aunt. To do this, Louis chose to give up his lucrative business and devote himself entirely to his children. His daughter, Celine, explains that he desired “to take us away from influences that he considered too worldly among some of his friends, and from the liberal ideas of others.” Celine concluded, “How grateful we should be to him for a decision so wise and so disinterested!”

Saint Louis lived his fatherly vocation with a focus on the greatest welfare of his children despite the personal cost to himself. St. Therese explains: “Hard as he was on himself, he was always affectionate towards us. His heart was exceptionally tender toward us. He lived for us alone. No mother’s heart could surpass his. Still with all that there was no weakness. All was just and well-regulated.”

St. Louis Martin developed himself as a man of virtue and sought to have affection and firmness toward his children in right order. One story, recorded by Celine, explains how Zelie helped encourage Louis on the side of affection.

Louis grew up in a family where children were taught to address their parents with the more formal “vows,” instead of the more intimate “tu,” and he suggested the same practice to Zelie for their children. But Zelie objected that formal attitudes and phrases might give the impression of distance. Louis agreed immediately.

Celine further describes how in the intimacy of home life Saint Louis often called the children by affectionate or characteristic nicknames: “Marie was ‘the diamond,’ sometimes ‘the gypsy’ on account of her independent spirit. Pauline was ‘the fine pearl,’ then came ‘good-hearted Leonie.’ I (Celine) was ‘the dauntless one.’ As for Therese, she was in turn ‘the Little Queen of France and Navarre,’ ‘the Orphan of the Berezina,’ the ‘little blonde May-beetle,’ or the ‘Bouquet.’”

For all of his affection and tenderness, Louis was not weak or passive. He was very much engaged in the lives of his children and he was quite firm when needed. We will return to the holy firmness St. Louis Martin in the next post.

Step 1: For the next 48 hours I will be on the lookout for an occasion when my children are all in the same room and occupied with some work or play.

Step 2: When I discover such an occasion, I will take a seat nearby with no other agenda than to put all my attention into watching them.

Step 4: I will use these nicknames naturally in the home to increase our intimacy.