Order All Your Responsibilities to God’s Kingdom 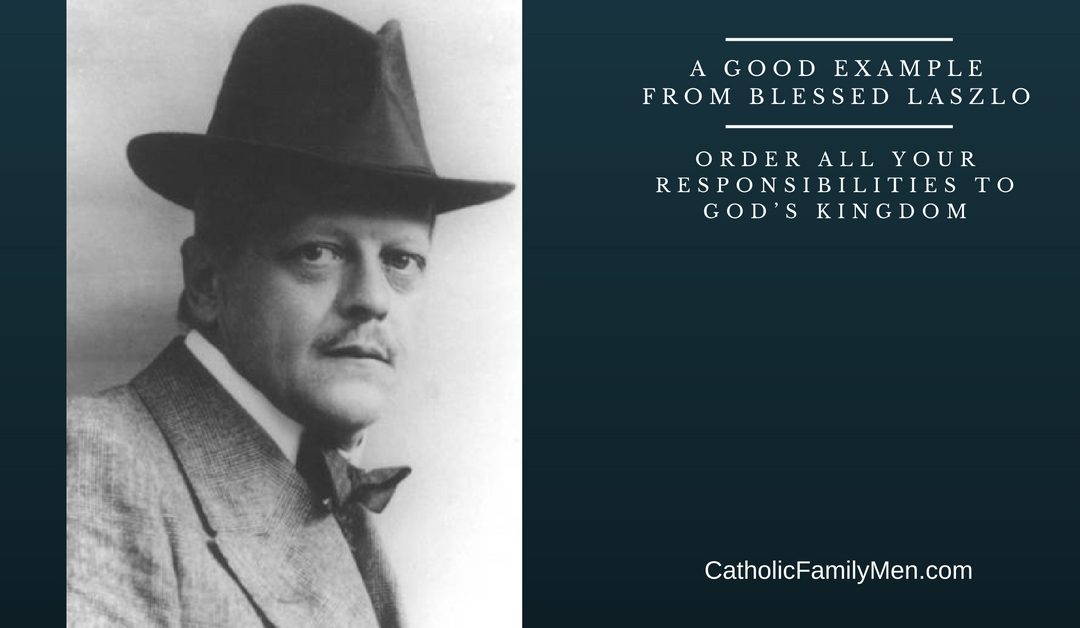 Ladislaus, a.k.a. Laszlo, was born into the lineage of Hungarian nobility in 1870, the sixth of ten brothers. Material wealth enveloped him, think castles and vast lands, and at the age of nine his parents divorced when his father left the family and converted to Protestantism in order to marry another woman. His mother died when Laszlo was 12.

In his late twenties, near the end of his university years, Laszlo was indifferent toward God and mired in a sinful life that was far from the moral law. He graduated as a physician in 1900, specializing in surgery and ophthalmology, but he described his student years as “unhappy” until he entered into a period of engagement with Countess Maria Theresia Coreth in 1898. It was then that Laszlo experienced a major conversion to faith in Christ.

Laszlo and Maria built their marriage and family upon Jesus and the truths transmitted by His Catholic Church. Thirteen children resulted and Laszlo became a faithful and contented man by God’s grace.

True faith impacts the whole person and so it is no surprise that Laszlo’s faith impacted the entirety of his life. He gave of himself to his work with great dedication and generosity, becoming known as the “doctor of the poor,” and at the same time, he also took great care in his marriage and in the formation of his children.

Laszlo “had a real partnership with his wife and used to discuss all his concerns with her. She was his assistant, not only in his practice as a physician but also within the family in dealing with the children or the domestic help. They were not at all haughty about their rank; both of them showed respect and Christian courtesy to all people, even to gypsies, beggars, and others who were marginalized by society at that time. Each spouse encouraged the other to make generous donations to charities and often to perform heroic services for the needy.”

As one son has stated, “Daily Mass and the Rosary were just as much a part of our daily routine as mealtimes.” Regardless of whether Laszlo’s attention was on personal concerns, family, society, or the world at large – “Thy Kingdom Come” was the dominant note in his prayers.  According to one nurse who used to assist Laszlo, “God was, so to speak, the air he breathed.”

All quotes from Married Saints and Blesseds.

Step 1: I will go forth today with the simple focus of Blessed Laszlo in my heart and on my lips: “Thy Kingdom Come.”

Step 2: I will seek to maintain this simple focus for the rest of the day in all things. If/when I am aware of drifting away from this touchstone, I will refocus my attention upon it and begin again.

Blessed Laszlo, pray for us!