Pray the Rosary Daily and Deeply 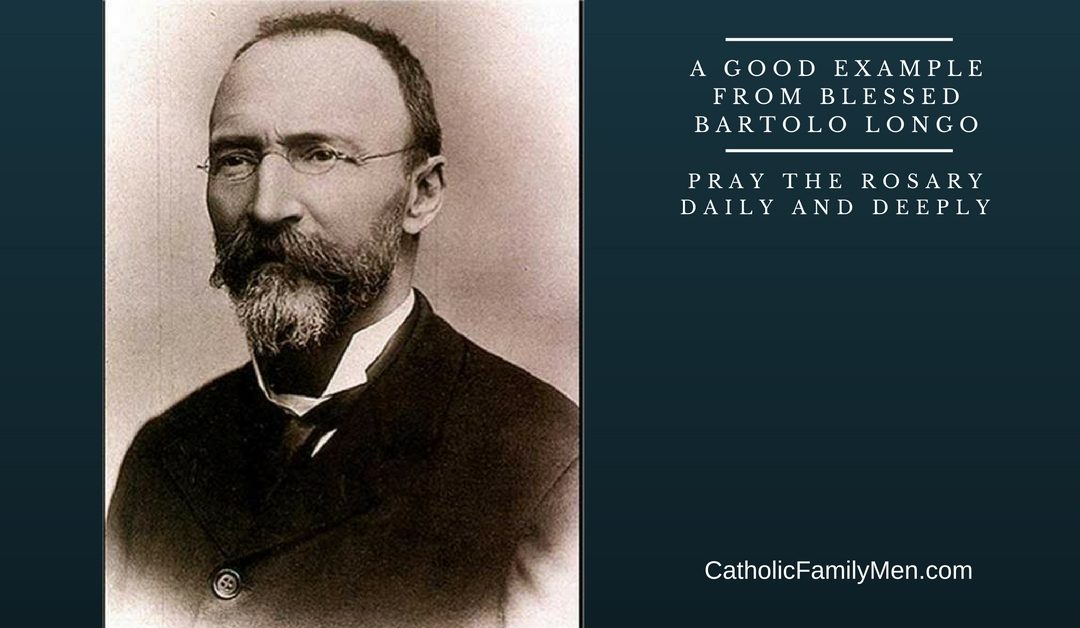 Blessed Bartolo Longo is a somewhat unconventional family man in that he entered marriage at an older age (44) and then lived the married state while remaining faithful to a previous vow of celibacy he had made (he and his wife even slept in separate rooms). Longo received counsel from Pope Leo XIII who encouraged him to marry his longtime friend and charitable collaborator Countess Mariana di Fusco.

Considering that not too many men discern a call to enter into a Josephite marriage after consulting with the Pope, Blessed Bartolo Longo may seem quite unrelatable at first glance. Nevertheless, Longo lived an earthly life that included an enormous amount of responsibility and facing the challenge of fulfilling many responsibilities well is very relatable to men in our time.

Bartolo Longo was a lawyer, fundraiser, property manager, teacher, writer, Lay Dominican, and servant of the poor in both material and spiritual poverty. Longo led the building of a grandiose basilica, established orphanages and homes for children of imprisoned convicts, founded a religious order of sisters, created and edited a newspaper, and was faithfully married for 39 years. How did Longo accomplish so much, so well?

“I paused briefly before the tomb of Blessed Bartolo Longo and, praying, I asked myself: ‘Where did this great apostle of Mary find the energy and perseverance he needed to bring such an impressive work, now known across the world, to completion? Was it not in the Rosary, which he accepted as a true gift from Our Lady’s Heart?’ Yes, that truly was how it happened! The experience of the Saints bears witness to it: this popular Marian prayer is a precious spiritual means to grow in intimacy with Jesus, and to learn at the school of the Blessed Virgin always to fulfill the divine will. It is contemplation of the mysteries of Christ in spiritual union with Mary…”

Blessed Bartolo Longo was known to pray the Rosary daily. One could also expect that he did not merely rush through a recitation of the vocal prayers, but rather he would keep a reflective pace in the vocal prayers while investing his heart deeply in pondering the mysteries.

“Without contemplation, the Rosary is a body without a soul, and its recitation is in danger of becoming a mechanical repetition of formulas and of going counter to the warning of Christ: ‘And in praying do not heap up empty phrases as the Gentiles do; for they think that they will be heard for their many words’ (Mt. 6:7). By its nature the recitation of the Rosary calls for a quiet rhythm and a lingering pace, helping the individual to meditate on the mysteries of the Lord’s life as seen through the eyes of her who was closest to the Lord. In this way the unfathomable riches of these mysteries are unfolded.”

Blessed Bartolo Longo’s own words further affirm the reality of the riches available to us:

“Just as two friends, frequently in each other’s company, tend to develop similar habits, so too, by holding familiar converse with Jesus and the Blessed Virgin, by meditating on the mysteries of the Rosary and by living the same life in Holy Communion, we can become, to the extent of our lowliness, similar to them and can learn from these supreme models a life of humility, poverty, hiddenness, patience and perfection.”

Step 1: I will commit to praying the Rosary every day at a time that is most suitable for me.

Step 2: I will set aside 45 minutes daily for this time of intimacy with Jesus and Mary in order to be free from any sense that I am in a hurry and need to rush through the prayer.

Step 3: I will look forward to my daily appointment, show up, and follow through.

Blessed Bartolo Longo, pray for us!