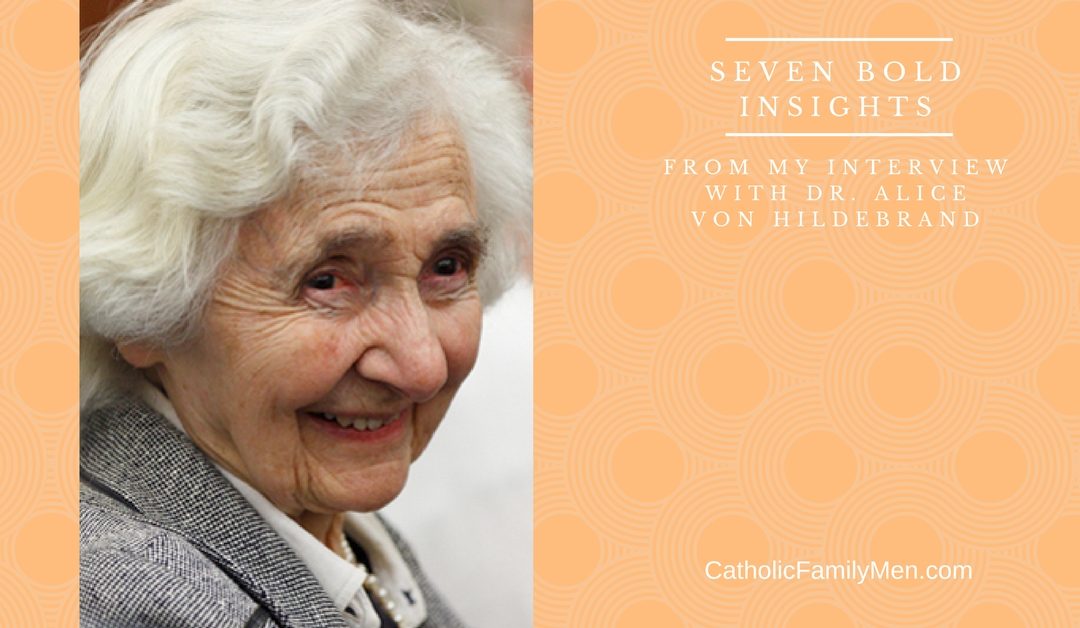 Several years ago, I had the blessing of doing a short interview with Dr. Alice von Hildebrand. I recently listened to it again for the first time in a long time and I was blown away by some of her insights. I have highlighted seven takeaways, with quotes from the interview below (transcribing the best I can). You can also listen to the interview in its entirety here:

1. Men and women are different, complimentary, and we truly need each other.

“Man is characterized by his strength, his courage, his nobility; he’s meant to be chivalrous to protect the weak. The woman has something tender, she has empathy, she has a much easier time feeling herself into others. And so they have this complementarity, it is profound. ‘It is not good for man to be alone.’ In order to be complete, man needs a woman and a woman needs a man. Now this goes so far that the holiest priests I have met in my life, who have dedicated their lives to God and live in perfect celibacy, all have a very special devotion to the Holy Virgin and the Holy Virgin gives them what would be lacking if it was simply a development of male characteristics.”

2. The Catholic Church and her Sacramental life are essential for authentic masculinity and femininity.

“The tragedy is that after original sin all the beautiful, magnificent male qualities, such as strength and courage and virility and so on, degenerated into something that is unfortunately a horrible perversion: male brutality – you just need to read the newspaper to find out that day after day women are abused and battered by the activities of their boyfriends or husbands. On the other hand, the beautiful female characteristics of empathy and sweetness, the heart can degenerate into self-centeredness, pettiness, sentimentality, all sorts of distortions. Now when both are distorted, both of them need to be purified. And this is the unbelievable gift of the Roman Catholic Church. I’m a cradle Catholic, and day after day after day, I’m more grateful of the fact that ever since I was a child I have been given Catholic food.

For example, take the seven Sacraments, all of this struck me as a little girl, that every single problem, every single difficulty, has an answer through the Sacraments – through Baptism we are brought back in communion with God, in Confirmation we are strengthened, through the Holy Eucharist we receive the divine food that God, that Christ, promised to his disciples and gave at the Last Supper, through the Sacrament of Penance you can cleanse yourself of your daily sins and imperfections – for every single facet of human life you have divine help.”

3. The enemy of femininity is feminism.

“Feminism has actually harmed femininity. In my mind, when you say feminism and femininity, you are saying two things that are radically different. The enemy of femininity is feminism because feminism basically looks down upon femininity as a sign of inferiority and so they say ‘man is truly the one who is powerful, is the one who is setting the stage, is the one who is creative, so women have to become like men.’ No. Obviously a woman can never become a man. At best she can be a caricature of a man and this is what we often see today: when women behave like men, swear like men, smoke cigars like men, and then believe that they are very manly. In fact, they’re betraying their femininity.”

4. The lives of the Saints reveal masculinity and femininity redeemed. Both are marked by holy courage.

“…what is amazing, is that through grace, man can be purified and his beautiful male characteristics can revive, can be rejuvenated…you see that in the Saints: they are strong, they are powerful when it comes to defending the faith, they are gentle and tender toward the weak. In other words, the great mistake is to believe the opposite of strength is gentleness. It’s not true at all. Strength and gentleness belong together – you find this in Christ, who is so strong and simultaneously meek of heart, you find that in the Saints. What is the opposite of strength is weakness and cowardice.

You find the very same thing in women – the opposite of sensitivity, of empathy, is not sentimentality, which is basically to be sense-centered, it is a holy courage for the faith. This is why, for example, one of the things that always impresses me so, is the Holy Virgin at the foot of the Cross. We have to keep in mind that no human being has ever suffered as much as the Holy Virgin – she had the greatest privilege ever granted to a human being, simultaneously she carried the heaviest cross because she was at Calvary watching every single step of this abomination which is the Crucifixion. And what is absolutely amazing, this struck me already when I was a little girl: Mary was standing. She was not collapsing in self-pity. She was standing because it is by standing that she collaborated most with the Crucifixion of her Son. This is why the Blessed One is also the Mother Dolorosa.”

5. The key to right thinking and right living is reverence and humility in our metaphysical posture toward God.

“Something that occurred to me fairly recently: when Adam and Eve were in Paradise, there was love, there was peace, they were in harmony, they were obeying God, then comes the serpent…what does he do? The amazing thing is he doesn’t make a declaration, he raises a question – ‘why can’t you eat of the fruit of the tree?’ Now it seems to me every one of us is going to say, ‘Isn’t it legitimate to raise questions?’ My answer is: the questions that you raise, betray the metaphysical posture that you’ve taken. The very moment that you start challenging God, in this very moment you are wrong in metaphysical posture. And this is what the devil said, he didn’t say ‘disobey,’ he said, ‘why can’t you?’ And all of the sudden the stupid Eve says, ‘Yes, indeed. Why can’t I?’ In this very moment she cuts herself off from God, then fell into sin. And you know the consequences are dreadful of course.

But what is amazing is that the woman is the one that the serpent addressed. According to St. Augustine, the serpent addressed himself to the woman because she is the weaker one, I say no, he addressed the woman Eve because she has such an influence on Adam that he (the serpent) knew perfectly well that once Eve ate, he (Adam) would follow too, which is exactly what happened. A woman has less power, she has less authority, but she has an enormous influence that she can use for good or for evil. So the whole question is – What are the questions that you raise? They betray your metaphysical posture.

For example, you say today ‘why can’t two men get married?’ The question cannot possibly be raised once you are in the right metaphysical posture and understand that God made man, male and female. So two men, or two women, can never, never fulfill what humanity is because it is both male and female. So once you raise that question, you are just on the wrong track, and once you’re on the wrong track, one mistake will lead to another mistake will lead you to the abyss, which is revolt against God.

The question raised by the devil was a devilish question. What about Mary in Nazareth?: ‘How can this be? I know not man.’ She’s raising the question in an attitude of awe, respect, and humility. And she gets the answer; therefore it’s not a question of raising the question, it is a question of raising the right question, in the right metaphysical posture, and toward God it is always reverence and humility. In the other case, it is arrogance and basically you put God in the dark. And you see you have to justify your attitude, you have to justify what you have done, and then you’re off track.”

“On this Earth, God has so made it after original sin that love and suffering cannot be separated. And you find that in Christ (who is the Incarnation of Divine Love; He is Love itself)…He accepts torture and the most abominable death in order to save us.

Now therefore to my mind, what is maternity? It is self-giving, total self-giving for another person, because after all, a mother raises her child for others, not for herself. If the mother wants to give the child for herself, she’s just a selfish mother, she’s not a good mother. God has given the child to her, she’s giving it to others. Simultaneously, maternity is linked to profound suffering. Of course it’s another question that the feminists are going to raise, ‘why is it that for a male, procreation is a moment of ecstasy and that’s all there is to it, why is it that for a woman, it is linked to nine months which can be discomfort, which can be pain, which can be excruciating pains, and simultaneously can be life-threatening.’ Now this is the privilege of being a woman, because accepting to suffer, she understands that on this Earth you cannot separate love and suffering.”

7. In this life, suffering has tremendous value – it affords us an opportunity to love like Jesus.

“In the world in which we live, people want fun, but they don’t want suffering; therefore, you’re going to seek to eliminate suffering. For example, you’re not expecting a child and the child comes, you abort it. Suppose for example, that someone is elderly and is not producing anything at all: euthanasia, you get rid of it. You try to eliminate suffering and by so doing, you create a world which is diabolical and so haphazard that love is totally eliminated. Don’t forget – the world in which we live is an attack on the Cross. This is what happened when Obama went to Georgetown. They covered the crosses. The Cross and Christianity are one on this Earth. It is only in Heaven that all this will be translated and every tear will be dried, but on this Earth, you can expect suffering and when suffering is transfigured by love it will bring you closer to God.”

*In her book, The Privilege of Being a Woman, Dr. Von Hildebrand states the following: “All women without exception are called upon to be mothers…to refuse this maternity, is to refuse to love. It is to refuse to suffer in order to give life.” The call to paternity and maternity are so deeply ingrained in man and woman that a spiritual motherhood and fatherhood exist even beyond the biological.