Unite Your Sufferings with Jesus and Mary 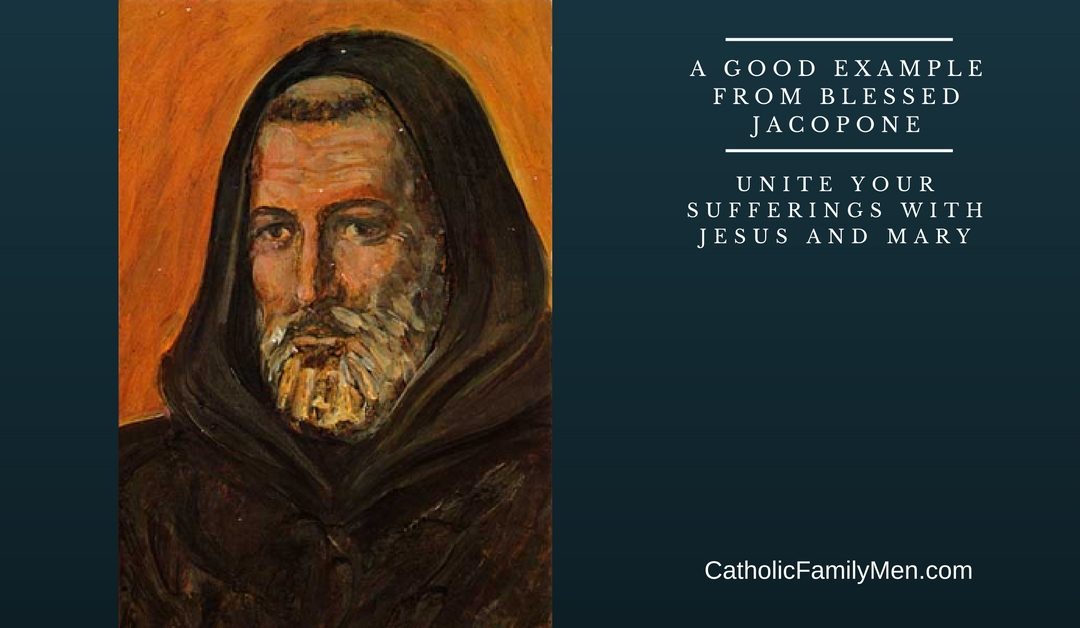 A good example from Blessed Jacopone of Todi:

Born as a member of a noble family in the northern Italian city of Todi, Jacomo (“James”) became a lawyer and had a reputation as a worldly and greedy man. Yet, by God’s grace, he met and married Vanna, a beautiful and virtuous noblewoman.

After their wedding, Jacomo continued to indulge in great extravagance and worldly amusements, while Vanna desired a modest Christian life and committed herself to hidden acts of prayerful penance on behalf of her husband. After only one year of marriage, tragedy struck.

Jacomo took great pleasure in showing off his wife’s beauty and winning the admiration of other men. With such motivation, Jacomo organized a festival in Todi and commanded that Vanna be dressed up as a beauty queen and seated on a high platform where all could see her among the other aristocratic ladies. In the course of the raucousness of the festival, the platform came crashing down and Vanna was buried in the ruins.

When Jacomo reached his wife and pulled her badly wounded body from the wreckage, he opened her belt and loosened her bodice to comfort her. He discovered that underneath her luxurious gown, Vanna wore a girdle made of goat’s hair against her tender skin. As Vanna lay dying she whispered into her husband’s ear, “That was for you!”

Shaken both by Vanna’s sudden death and the realization that she had been living a life of hidden penitential love for him, Jacomo was inconsolable. His only comfort came when someone reminded him of the Mother of Sorrows, beneath the crucifixion of Jesus her son. Jacomo experienced a major conversion – he gave up his successful career as a lawyer, divided all his wealth among the poor, and committed himself to a life of penance.

It must have caused quite a stir in Todi to see this former man of excess voluntarily dressed in the rags of poverty. It was during this time when former associates mocked Jacomo as a fool and gave him a new name – Jacopone or “Crazy Jim.” The name became dear to him and after ten years of penance, Jacopone was admitted into the Friars Minor (Franciscans) as a lay brother.

“(Jacopone) performed the most menial tasks in the friary and glowed with an ardent love for Jesus Christ and his sorrowful Virgin Mother. The greatest sorrow he experienced as a friar was caused by his recognition that God is loved so little or not at all and is much offended instead, particularly by married couples, whose life together is so often without love and frequently marred by shameful abuses that disregard the real purpose of marriage.” (Married Saints and Blesseds Through the Centuries, 222).

Blessed Jacopone was also a songwriter throughout his life. Prior to his conversion he wrote songs to be performed at festivals, and afterward he composed songs in praise of Christ and Mary. Jacopone’s most beautiful and famous hymn is the sequence Stabat Mater Dolorosa (“The sorrowful mother stood”), which meditates on the sufferings of Mary during Jesus’ crucifixion. The hymn is said to have originated in Jacopone’s bitter suffering after the tragic death of his beautiful and beloved wife Vanna.

The popularity of the Stabat Mater has led to various translations and musical settings and the hymn is still frequently incorporated into Liturgies and devotions, especially the Memorial of Our Lady of Sorrows (September 15), the Friday before Holy Week, and the Stations of the Cross.

Step 2: I will answer the question – “What is the source of the deepest suffering I carry within me?”

Step 3: I will freely seek to face the entirety of this suffering and to offer all of it and all of myself in love to our Father, in union with Christ crucified and His sorrowful mother Mary.

Step 4: I will search out a musical version of the Stabat Mater that helps me to enter into the love of Jesus and Mary and I will use it as a frequent source of prayer.

Blessed Jacopone, pray for us!