Write a Philosophy of Formation 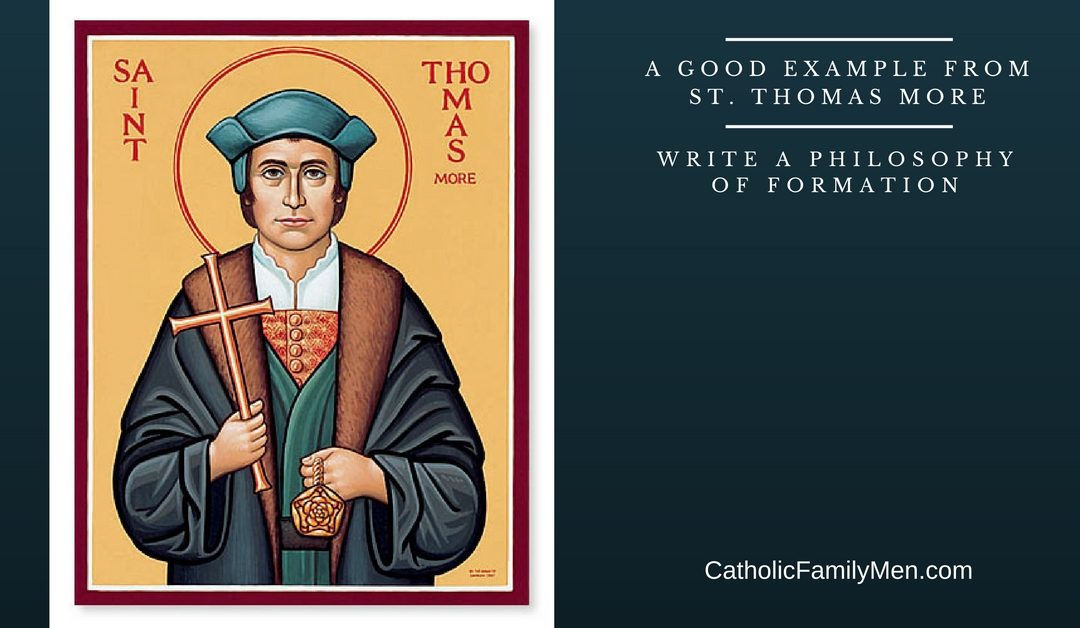 Saint Thomas More took his fatherly responsibilities very seriously. Thomas had an unyielding intention to provide for the needs of his children, especially in the area of formation. This formational provision was extra-challenging for Thomas since besides his responsibilities as a father, he also felt called to take on many professional duties that kept him away from his home for substantial amounts of time.

In the summer of 1511, Thomas’ wife Jane died after only six and one half years of marriage, leaving Thomas with four young children. Soon after, Thomas decided it would be best to remarry Alice Middleton for the sake of his children. Alice has been described as hard-working, enterprising, respectful, and competent. She was also described by Thomas’ friend Erasmus as “not especially beautiful and no longer a little maid, either.” Erasmus further made clear that Thomas remarried “for the sake of his family rather than for pleasure.”

Additionally, Thomas enlisted tutor William Gosnell for his children. He wrote the following to William, a kind of philosophy of formation:

“…to put virtue in the first place among goods, learning in the second; and in their studies to esteem most whatever may teach them piety towards God, charity to all, and modesty and Christian humility in themselves. By such means they will receive from God the reward of an innocent life, and in the assured expectation of it will view death without dread, and meanwhile possessing solid joy will neither be puffed up by the empty praise of men, nor dejected by evil tongues.”

Thomas clearly placed a high value on education, yet he viewed education to be at the service of a broader human formation that seeks the development of virtue as the greatest good. He specifically mentions four virtues: piety, charity, modesty, and humility. Thomas also explains the value of acquiring these virtues by describing a few clear outcomes: an innocent life (the peace of a clear conscience), a firm expectation of a good death (free from fear of death), and a solid and secure joy that is not shaken by praise or ridicule.

Step 2: I will write a similar short philosophy of formation as if writing to my own William Gosnell. I will write only three sentences and follow Thomas’ general format – 1. Write a statement on the rightful place of education within a broader formation that puts virtue first (sentence one); 2. List the most important outcomes for the formation of my children (sentence three); 3. Identify the 3-4 key virtues that when acquired will most assuredly lead to those outcomes (sentence two).

Step 3: I will understand that I am the Gosnell in the lives of my children (we have no tutor). Therefore, I will read this philosophy of formation daily to keep focused on the mission of providing whatever is necessary to form my children in the key virtues identified.

Saint Thomas More, pray for us!